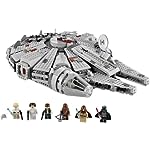 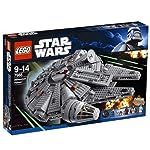 Kids ages 9 to 14 will be happy the old man got the tractor beam out of commission when they blast off with the Millennium Falcon LEGO Star Wars Set. Straight from the Death Star escape scene of Episode IV: A New Hope, this replica of Han Solo’s iconic starship is crafted from more than 1,200 LEGO pieces for a detailed, articulating display. With twin flick missiles, rotating laser cannons, and detachable cockpit cover, this Millennium Falcon set’s got quite a lot of surprises left in it. 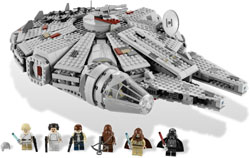 Six mini-figures from the movie let you recreate your favorite scenes. View larger. 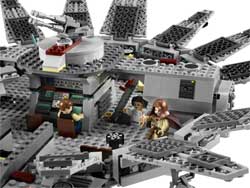 The a lot of details on this modified Corellian Engineering Corporation YT-1300 freighter would impress even Luke Skywalker. Measuring more than 15 inches wide and 4 inches tall when completed, this model appropriately depicts the famous Millennium Falcon, from its distinctive round shape to its right-hand cylindrical cockpit.

Place figures outside the ship to have Obi-Wan and Vader duel, or place them inside the opening hull to play chess, hide in the smuggling compartments, or observe Luke’s remote training. For enhanced play, the set includes three lightsabers, three blasters, and one crossbow.

Building Your Own Millennium Falcon

With 1,254 LEGO pieces, the Millennium Falcon took more than four hours for our testers to construct. Split between two adult builders, these hours provided a fun time to reminisce about favorite Star Wars moments.

A large percentage of the pieces come in shades of gray, and approaching construction requires a bit of organization and discipline. Detailed step by step instructions help ensure that construction is a moderately straightforward process, despite the complexity of the finished model.

As impressive as the finished model may be, our testers noted a few minor oversights worth mentioning. For starters, there are no mini-figures of C-3PO or R2D2 included, making the scene reconstruction feel incomplete. Also, only Han Solo and Chewbacca are capable of fitting in the cockpit. Then again, considering the amount of overall detail included in this model, any Star Wars fan would be delighted to proudly put it on display.

What’s in the Box